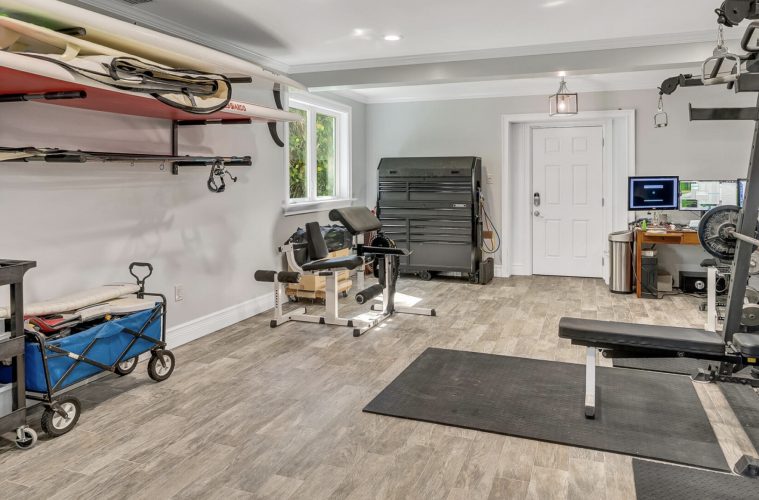 Ubiquitous across the modern suburban landscape, auto garages are built to store automobiles when not in use. Doing so protects vehicles from the elements, reduces car thefts, and limits the number of cars parked on the street.

However, as most homeowners know, garages get used for more than parking cars. They frequently double as storage sheds, where – slowly but surely – clutter accumulates around a central cavity just big enough to park an automobile without causing a cave-in.

Is this the best way to use extra garage space? There’s got to be a better option. Fortunately, we have some ideas to offer. The following are six ways to turn spare garage space into something functional and useful:

As mentioned earlier, extra garage space is almost always used for storage. Unfortunately, it’s usually a disorganized mess, with lawn care equipment leaning against boxes propped against bicycles and covered in a web of dusty holiday lights. Rather than letting your garage become a glorified junk closet, opt for modular storage systems and other efficient means of keeping unused items organized. By installing shelves and drawers along one or more walls, you make greater use of vertical space and leave the floor open for lawnmowers, weed eaters, and vehicles.

Another great way to use spare garage space is converting part or all of it into a small home gym. Depending on the space available, your garage gym could include a treadmill, exercise bike, weight bench, and weight rack. However, assuming there’s no central air venting into the garage, you’ll need to think about ways to stay cool. We suggest using a large barn fan or keeping the garage door open when working out. If there’s a window, you could also install a window unit air conditioner. If the garage lacks a window, then consider a portable unit.

Converting part of a garage into a workshop for building and repairing items is another common way to use spare garage space. Many garages come with a workbench already built on one of the walls, complete with a wall rack for tools. Even if your garage doesn’t have a workbench, installing a pre-built one is usually not too difficult. From there, it’s all about making sure you have the necessary electrical system installed to allow the use of power tools and other machines requiring large amounts of energy. Once your power needs are sorted out, the next step is to accumulate all the necessary tools and appliances. Some handyman skills wouldn’t hurt, either.

While its signature features may have evolved over the years, rec rooms remain a popular way to use spare rooms and extra space. Whether it’s a place to shoot pool and throw darts with the fellas, a mini arcade to play pinball and video games with friends, or an indoor playground for the little ones, there are many ways to set up a home rec room. Virtually all of them can be achieved in an average-sized garage. What’s more, given the access afforded by a large garage door, game cabinets, and other bulky items can be moved in and out with ease, enabling families to make changes to their rec room as kids get older.

Ask any man over 30 what he’d do with spare space in the basement or garage, and the answer is near-universal: “I want a man cave!” But what is a man cave, exactly? It can be whatever you want – and yes – women are more than welcome to have their own version (commonly referred to as a “she-shed.”) The typical layout involves a couch, minibar, and the biggest television your budget will allow. But it’s the little things that make a big difference; a few decorative items combined with a rug and other furnishings will make the place a comfortable hangout rather than a dreary dungeon.

Roughly half of all American households have at least one person who plays a musical instrument. Whether it’s little Susie learning to play the flute, your teenage drummer practicing with his bandmates, or your spouse revisiting their electric guitar glory days, the noises can be as annoying as they are pleasant. By having the music confined in a room off the main house – preferably with soundproofing material attached to the walls – the rest of the family keeps their sanity while the musician focuses on their craft.

Extra space at home is a terrible thing to waste. Take a look around your garage and ask yourself if more can be done with the space you’re using. We’re willing to bet the answer is ‘yes.’