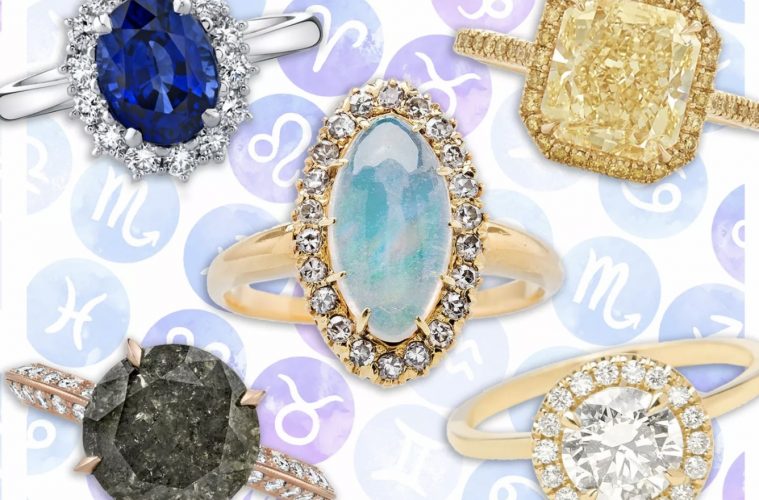 Choosing an Engagement Ring based on Zodiac Signs

If you’re looking for inspiration when it comes to the engagement ring you pick out, then you might consider what the wonderful world of astrology has to say on the subject. For thousands of years, people from all over the world have tried to derive special meaning from the movements of the stars in the sky. While not everyone believes in this stuff today, we can still appreciate the aesthetics that go along with the signs of the zodiac, and work them into significant items of jewellery and personalised decorations.

What are the Zodiac signs?

Everyone knows the twelve signs of the Zodiac. But what you might not know is that they’re grouped in sub-categories. There are elements, namely: fire, earth, air and water. Then there are modalities, namely: cardinal, fixed, and mutable. Every sign is a combination of an element and a modality. Finally, there are ‘polarities’ – positive and negative.

So, for example, Leo is a positive fixed fire sign. Consequently, Leos are meant to be spirited, passionate and attention-seeking.

Love and the Zodiac Signs

According to a survey by F. Hinds, a jeweller specialising in engagement rings, around a fifth of Brits are on the dating market specifically for a person of a given sign, as they believe that this will make them more compatible. This is based on the self-reporting of 2,000 adults in the UK.

Interestingly, accordingly to the polling, Millennials are the most committed to astrology, with around three in five claiming that it has an effect on romance, and around one in six choosing their love interests based on star-sign compatibility.

So exactly who might make a good match, in theory? The authors of the study asked Bex Milford over at Cosmic Cures. Among other things, she said that Aries might go well with Libra, and Aquarius with Gemini.

Milford has a few things to say about how to choose an engagement ring, too. For Taurus, Cancer, Virgo and Capricorn, a traditional ring is best. For Aries, Gemini, Leo, Libra, Scorpio, Sagittarius, Aquarius, or Pisces, you can go a little bit more adventurous.

Of course, if there is a tendency for us to prefer a particular sort of partner, and for certain combinations to produce more romantic success, then we’d expect this to be reflected in the rates of marriage and divorce. Dr David Voas over at the University of Manchester decided to do this research back in 2007, and found no correlation between birthday and the success of a particular relationship. “The numbers are just what we’d predict on the basis of chance,” he said.