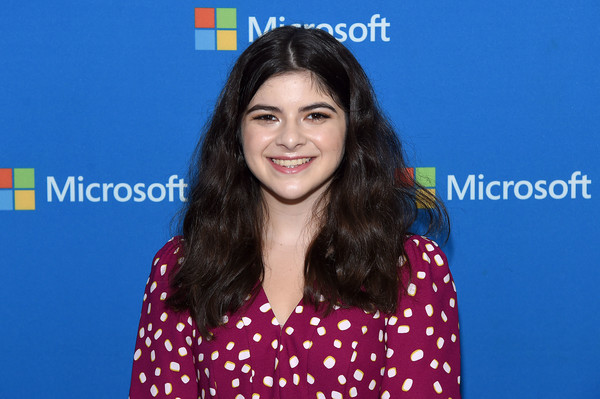 Gabriella Pizzolo is an American actress and singer. Born in 2003, she made her breakthrough on Broadway by portraying Matilda in Matilda the Musical. But she really burst into the public’s eye with her role in Stranger Things in 2019. Gabriella is still a young child, in her teenage years. Yet, she earned a decent amount of money.

As of October 2020, Gabriella Pizzolo’s fortune is more than $1 million. She received widespread recognition as Suzie in Stranger Things.

Gabriella started her career in regional productions of plays. She appeared in Les Miserables, Miracle on 34th Street, and Ragtime. She was just seven years old at the time.

After appearing in regional productions, she made her Broadway debut as the lead character in Matilda the Musical. Pizzolo auditioned for the original cast. But she did not get the role. After auditioning again, she got her first appearance on December 22, 2013.

Pizzolo made a couple of more appearances as Matilda before going to other Broadway productions. Her final Broadway appearance came on September 13, 2014. Between 2013 and 2014, she also appeared in a Ralph Lauren Fashion Show.

In 2015, she got cast in the musical Fun Home. She played a couple of roles, including Small Alison, Christian, and John. She assumed the role of Small Alison after the departure of Sydney Lucas in October 2015. During her tenure, Gabriella performed Ring of Keys at different events. She played the role until the production closed in September 2016.

Just a month after that, she performed in the concert version of Saturday in the Park with George at New York City Center. In January 2017, Pizzolo got the role of Opal in the musical Because of Winn Dixie. The next year, she voiced Cricked in the 2018 series Butterbean’s Café.

Pizzolo burst into the scene in 2019 after getting the role of Suzie in Season 3 of Stranger Things. Gabrielle is a young star. Yet, she lives with her parents in a New York City apartment.

There is no information regarding dating history and relationships. While fans want to know more, she keeps her dating life private. And she is just 17 years old. Speculation of her relationship status will continue for sure. Gabriella found success in hiding any info from the media.

As of October 2020, Gabriella Pizzolo’s cash flow is more than $1 million. Gabriella enjoyed success from the moment she started her Broadway career all the way to her Hollywood debut. But everything changed after playing Suzie in Stranger Things Season 3. She won the heart of people when she sang her heart out to Dustin. Fans definitely want to see more of her.

But Pizzolo is not new to the movie industry. She got her Broadway debut in Matilda the Musical. Since then, she has appeared in Brain Dead, Beaches Fun Home, and Because of Winn Dixie.

During her tenure in Fun Home, Gabriella won the hearts of fans with her singing. She sang the song Ring of Keys at different events, including one at the White House. That helped her show her versatility as an actress. Gabriella works a lot and tries to improve every single day.

She also has a decent social media presence. As of October 2020, Pizzolo has more than 310,000 followers on Instagram. As of this moment, she doesn’t use social media as a source of income. But if that changes in the future, she has the tools to make money.