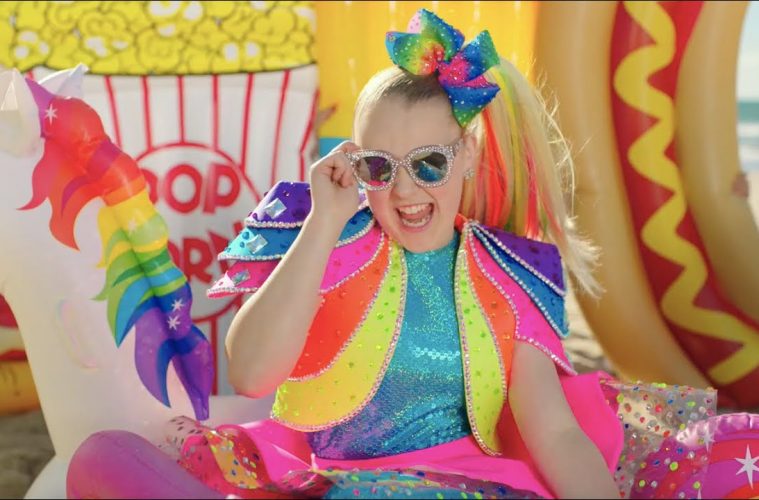 Think for a second about reality stars. How many of them came and rode off into the sunset? They might be on a show for one season, and then fall off a cliff. You might never hear from them again. But Jojo Siwa is not like that. She is a special star. Jojo managed to cash in on her fame and is now an international star and a mogul. She built an empire. How much is Jojo Siwa net worth?

Siwa got her start on a reality show Dance Moms. There, she appeared alongside her mother, Jessalynn. And she used the show to jump-start her celebrity career. Now, Jojo dances, sings, and runs an empire.

How Did She Build an Empire?

Even at a young age, Jojo Siwa had a vision. She dreamed big and wanted to be more than just a reality star. She hired a manager that shared her vision. Jojo worked with Caryn Sterling. Caryn called Siwa and told her she wanted to manage her. She believed in Jojo, who at the time was on Dance Moms.

For their first move, they wanted to find a partner. And their pick was Nickelodeon. At the time, it was the right home and situation for Siwa.

Jojo signed a deal with the company at 13 years old. And since then, the deal is lucrative for both parties. And from the moment she signed the deal, Jojo took a hand-on approach to her business. Early in the process, Nickelodeon wanted to discuss big business but without Jojo. And she called them and asked to be part of all meetings.

They launched a T-shirt. In the beginning, Nickelodeon was skeptical about the shirt. But it was a huge hit, and since then, the two launched hundreds of products. There are more than 500 employees that support the Jojo brand.

Because she cannot be everywhere, Siwa picks where to spend her time. She picks the meetings she wants to attend. In her words, most of the time that is Jojo toys. These are the biggest seller, followed by accessories and apparel.

The biggest seller is the signature bow. This is why many people know Jojo as the Bows Queen. Everything started with the bows. So far, Jojo sold more than 80 million bows. Consider the prices range between $5 and $16, and she generated more than $400 million with bows alone.

One of the big reasons Jojo is successful is her constant creative mind. No matter the size of her business, she continues to produce content. Siwa releases music performs when asked, and is active on social media. In her words, YouTube is her life. And then next is TikTok, where she can make dance videos.

Jojo is just 17 years old, and she is already a millionaire. Jojo Siwa net worth is more than $12 million. Will she wear bows when she is 25 years old? Nobody knows.

But the little princess is already thinking about the next projects. She goes on tours and plans a movie release soon.

How Much Does She Earn?

Jojo earns money from different platforms. For starters, YouTube pays her for subscribers and ad revenue. She has more than 10 million subscribers, earning a nice amount from there.

But bows are her main source of revenue. So far, she sold more than 80 million bows. Jojo sold more than 40 million in 2018 alone. With pricing between $5 and $16, the amount of money generated is breathtaking.

Besides her bows, Siwa has a whole line of merchandise and apparel. She sells night-lights at Target, and then dolls at Walmart. In a way, she is a money-making machine at only 17 years old.

How does she do it? She leverages her YouTube platform and fan base to make licensing deals. Jojo is the Kardashian of the teenage world. While Kardashians use their show to drive fans to brands like Kylie Cosmetics, Jojo uses YouTube to drive fans to her bows and dolls.

Her action figure doll beat out Barbie for a period of several weeks at Walmart. And that was after she mentioned the doll on her YouTube channel.

And we said she makes money from touring. She goes around the world and sells out massive stadiums. Her fans, Siwanatorz, always fill out the seats. And during the Covid-19 pandemic, she built a massive stage in her backyard. Now, she performs for fans on Instagram Live.

How much is Jojo Siwa Net Worth?

With so many different sources of income, Jojo is a millionaire. But how much exactly? As of 2020, Jojo Siwa net worth is more than $12 million. And you can expect that to rise in the following years.

Born in Omaha, Nebraska on May 19, 2003, Jojo started her career early on. She dances at two years old in her mother’s dance studio. Jojo first appeared on television in Season 5 and Season 6 of the reality series Dance Moms.

Before that, she appeared on the TV Series Abby’s Ultimate Dance Competition in 2013. But Dance Moms put her on the map. Her music videos accumulate more than 500 million views.

The latest rumors are that she dates a boy by the name of Elliott Brown. Jojo posted on Instagram hanging out with the man. There is no confirmation whether they date or they are just friends. And there is no word on the age of the man. Some fans Googled him and found out he is 28 years old. But he is just 18 years old.