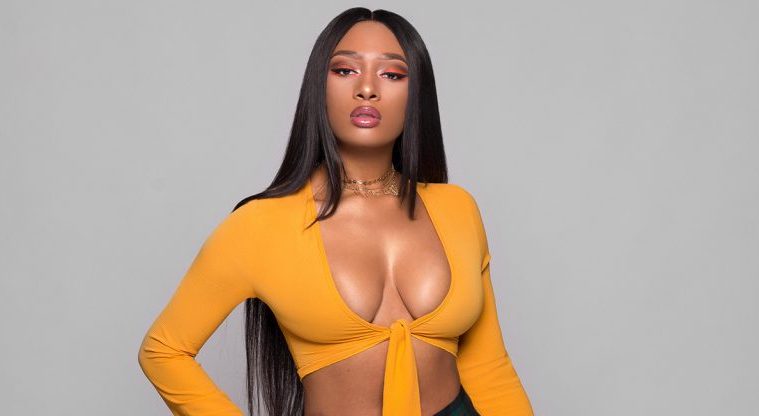 Megan Thee Stallion is a Huston female rapper, and she gained her fanbase by uploading songs and freestyles on YouTube. She called herself “Thee Stallion“, which is slang for “tall and fine“. Her favorite rappers are 2Pac, Biggie, Lil’ Kim, and 3-6 Mafia. She is the first female rapper that signed to 300 Entertainment and charts the Billboard Hot 100 with the tracks “Savage“, & “Hot Girl Sumer”. Megan Thee Stallion clocks in 13 Million Instagram followers, 3.4 Million on Twitter & 2.4 Million Subscribers on YouTube. With her massive growth in popularity, more and more people are starting to wonder who is Megan Thee Stallion, so it’s time to deep dive into her career.

Megan Thee Stallion was born Megan Jovon Ruth Pete on February 15th, 1995 in Bexar County, Texas, and spent her early years in Houston. Megan’s mom, Holly used to be a rapper going by the name Holly Wood. She had some local radio stations playing her music in the ’80s and she would take Megan to the studio when she was just a child. While she thought Megan was sitting with her coloring books in the waiting room doing normal kid things, in reality, a young Megan had her ear glued to the studio door, paying attention to mom’s lines. She would steal her mom’s beat CDs and write her verses when she was as young as 7 years old.

However, Megan wasn’t always the confident woman we see today. In elementary school, she was picked on. She never told anyone, until one day in second grade, she told her mom. And like the supportive mom that she had, she gave her the green light to go curse everyone out the next day. And from that point, she knew her worth and never looked back. She continued to write raps throughout high school but didn’t tell anyone she could do so. She was still shy in one aspect of her life, her rapping abilities.

When she was 18 years old, she finally got the courage to told her mom that she could rap. Her mom didn’t believe her, but after rapping her first verse, Megan’s mom was impressed. However, she was not impressed with the cursing in her lyrics and told her that she had to wait until she was 21 to come out with vulgar songs like that.
Megan’s grandmother was a teacher and emphasized the importance of education in her life from an early age. So before she went all into becoming a rap superstar, she was pursuing a more practical future, studying to be a nurse, thus pursuing a degree in healthcare management. She also had a long-term dream of becoming a plastic surgeon. However, she couldn’t stand seeing blood in front of her face.

Megan began to make a name for herself online in 2013 when she appeared in a cipher with Huston-based rappers. Megan came in with Drake’s “4 PM in Calabasas” beat, and her lyrics started to catch the attention of some influential people within the Huston rap-scene.

A couple of months later, she uploaded “Sally Freestyle” onto her YouTube channel. Her confidence and ability to rap quickly gathered a million views, and the video continued to blow up on Instagram and Youtube.

Megan waited until she was 21 before she dropped her first song “Thee Stallion“. Her mom became her manager and assistant, helping with her career. She got to see her daughter reach heights that she was never able to attain musically herself. In April 2016, Megan released her debut single “Like a Stallion“, and her first mixtape “Rich Ratchet“. She continued releasing songs in 2017, with her EP “Make It Hot“.

In early 2018, Megan signed with 1501, an independent label out of Huston. Shortly afterward, she dropped the “Tina Snow” mixtape, an ode to her favorite rapper Pimp C. That landed on Number 11 on the iTunes hip-hop charts. She says that her alter-ego is “Tina Snow” which is inspired by Pimp C’s alter-ego, Tony Snow. Pimp C was a huge inspiration for Megan and made her feel more confident, and she wants to inspire people to feel the same. She kept thinking about how good it would sound if a female rapper rapped the same lyrics as some of her favorite male artists. So she made the music that she wanted to hear growing up.

Eventually, her talents were spotted by record label 300 Entertainment. In November 2018, she was flown out to New York, and when she got there, balloons, champagne, and the contract were waiting for her. She became the first female rapper to sign to the label.

On May 17, 2019, Megan Thee Stallion released her second mixtape “Fever“. She won a BET Award for Best Female Rapper and Best Mixtape Of The Year. On January 22, 2019, she released “Big Ol’ Freak“. This song was blowing up online. Afterward, she released “Hot Girl Summer“, which became not only a hit but also a catchphrase. It peaked at Number 11 on the US Billboard Hot 100, becoming Thee Stallion’s first top 20 hit. She also landed herself on XXL Freshman Class List for 2019.

Unfortunately, not everything was good news. Just as Megan started to blow up, her mother passed away from a brain tumor, as well as her grandmother, in the same month. And because of this devastating news, in September 2019, Megan Thee Stallion signed a management deal with Roc Nation.

Megan is interested in writing horror movies, and in October 2019, she created and starred in the horror series, “Hottieween“, directed by Teyana Taylor. In January 2020 she announced a debut album by the name of “Suga“, releasing a lead single “B.I.T.C.H.“. Finally, in March, Megan released the album, as well as the song “Savage” which was an all-time hit from the very beginning. It also helped to boost the sales of her album “Suga“, reaching up to Number 7 on Billboard 200.

In June 2020 she released the song “Girls in the Hood“, and she also featured on Cardi B’s single “WAP“. The music video came out in August 2020, and she took part in it as well. This song became her second Number 1 song in the US, with the most streams in the first week of release. Moreover, in August 2020 Megan became a Global Brand Ambassador for Revlon.

These days, Megan Thee Stallion is the ultimate picture of confidence and self-assurance. This rap superstar, has a $3 million fortune, according to Celebrity Net Worth. And with a seemingly successful and money-making future ahead of her, the dollars will keep coming in her bank account in the upcoming years.

Finding success as a female pioneer in a male-dominated industry isn’t easy. Megan is a prime example of someone who is taking on the challenge like a boss. On July 12th, 2020, Megan was involved in a terrifying accident. She revealed that she was a victim of a crime that ended in a shooting. She was shot in her foot and had to get surgery. This incident was quite sobering for Megan. The trauma even caused her to back off from social media, and focus on making time for herself. Even though Megan is taking the rap world like a storm, her plans for the future may reach beyond the music industry. And they may lead to working in healthcare.