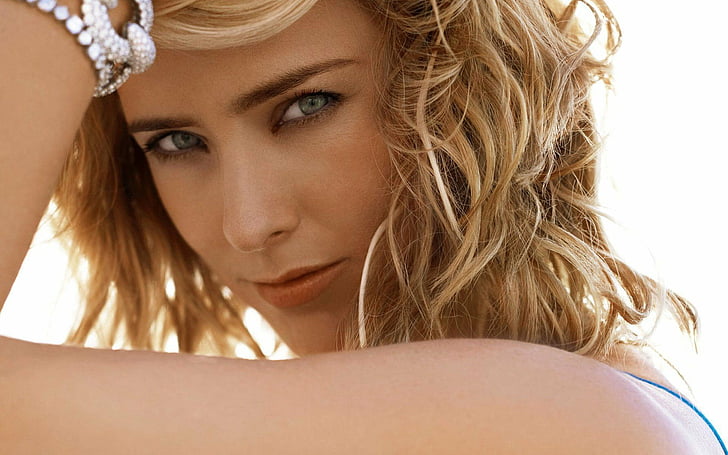 Elizabeth Téa Pantaleoni, better known by her stage name Téa Leoni, is an American actress and producer. In her early career, Leoni starred in the television sitcoms “Flying Blind” and “The Naked Truth“. Her breakthrough role was in the 1995 action comedy film “Bad Boys“. In later years, Leoni had the female lead roles in movies including “Deep Impact“, “The Family Man“, “Jurrasic Park III“, and “Fun With Dick And Jane“. In 2014, Leoni returned to television with the leading role in the CBS political drama series “Madam Secretary“.

In 1998, Leoni was cast as one of the stars of “Angels ’88“, an updated version of the 1970s show Charlie’s Angels. After production delays, the show never aired. The following year, Leoni was cast as Lisa DiNapoli in the NBC daytime soap opera “Santa Barbara”.

In 1991 she made her film debut with a small role in the comedy “Switch“, and later played another small part in “A League Of Their Own“. From 1992 to 1993, Leoni starred with Corey Parker in the short-lived Fox sitcom “Flying Blind“. In February 1995, she appeared in the sitcom “Frasier“, a spinoff from “Cheers“, as the fiancee of Sam Malone. And later in that year, Leoni landed the lead in the ABC/NBC sitcom, “The Naked Truth“. She played Nora Wilde, a tabloid news journalist. The show ran through 1998.

Leoni had the female lead role in the 1995 action-comedy movie “Bad Boys“, which was a box office success, grossing over $141 million worldwide. She made a break from television for a few years, and in 1998 was playing the leading role in “Deep Impact“, a big-budget film about a comet threatening Earth. The film received mixed reviews from critics, but it was a success at the box office, grossing $349 million worldwide.

In 2002, she starred as a film studio executive in “Hollywood Ending“, directed by Woody Allen, and had a supporting role in the box office crime drama “People I Know“. In 2004 she appeared as the wife of Adam Sandler’s character in the financially unsuccessful comedy-drama “Spanglish“. In 2005 Leoni starred alongside Jim Carrey in the comedy film “Fun With Dick And Jane“. The movie grossed $202 million at the box office worldwide.

Leoni co-starred in a number of small films in the late 2000s, including “You Kill Me“, and “The Smell of Sucess“. She co-starred opposite Ricky Gervais in 2008 supernatural comedy-drama “Ghost Town“. In 2011, she had a supporting role in the heist comedy film “Tower Heist“. In 2011, she was also cast alongside Hope Davis as leads in the HBO comedy pilot, “Spring/Fall“. However, the pilot was not picked up.

In 2014 she retired to broadcast television with the leading role in the CBS political drama series “Madam Secretary“.

With a career that is constantly successfully evolving, Téa Leoni has earned a reputation as one of the most talented and versatile actresses around. That being said, as of September 2020, Leoni has a fortune of $50 million. With her early breakthrough roles in movies and TV shows, she’s proven that she holds an impressive portfolio of work, and her latest show is considered to be one of the finest political drama.

Leoni was born in New York City. Her mother, Emily Ann was a dietitian and a nutritionist, and her father, Anthony Pantaleoni was a corporate lawyer. Leoni grew up in Englewood, New Jersey, and New York City, and attended two private schools. She attended but did not complete studies at Sarah Lawrence College.

Leoni married Neil Joseph Tardio, on June 8, 1991. However, they divorced in 1995. Leoni married actor David Duchovny on May 13, 1997. They have two children: daughter Madelaine West Duchovny and son Kyd Miller Duchovny. On October 15, 2008, Leoni and Duchovny confirmed that they have been separated “for several months”. The media attributed the separation to Duchovny’s much-publicized sex addiction. The couple publicly reconciled and were seen frequently together as a family.  On June 29, 2011, CNN reported that they split again. In 2012 Duchovny stated that he was still married, but separated. Duchovny filed for divorce in June 2014, and the couple had agreed to settlement terms by that August.

Leoni was named a UNICEF goodwill ambassador in 2001.