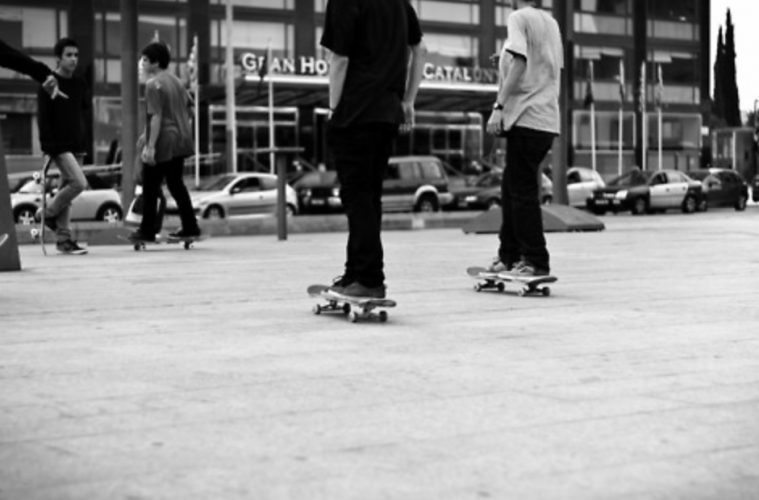 The skateboard, first invented in the nineteen-fifties and becoming associated with urban subcultures in the nineteen-sixties, has occupied a place in the public imagination for decades and professional skaters have become celebrated figures over the course of the new millennium. Skateboarding first started in California in the 1950s and the very first skateboards were made from roller skates that were attached to a board. Nowadays, the typical skateboard, consisting of a laminated sheet of maple plywood with four polyurethane wheels, appeared in its contemporary form during the nineteen-seventies and urban youths turned their towns and cities into their own recreation centres.

Films, magazines, music and television shows raised the public profile of skate culture and inspired others to adopt the lifestyle. Although there aren’t many examples in new music, the music genres of punk rock, heavy metal as well as reggae music became associated with skateboard culture towards the end of the twentieth century and many skaters adopted the rebellious outlook on life that was associated with these musical subcultures.

Risk is an aspect of skateboard culture, as with many sports, with many committed skaters acquiring the occasional scrape as a result of their skating practice. As time went on, stairs, ramps, and railings would later be used by skaters to perform stunts and tricks while designated parks provided another outlet for their activities. With the proper skating safety equipment and protection, like helmets, wrist guards, and knee pads, skaters of all ages can protect themselves while skating. While skateboarding may have started out as a hobby, over the years it also fast became a professional career for many. Some of the top professional skateboarders from around the world include Tony Hawk, Nyjah Huston, Bam Magera, and many more.

The arrival of skateparks, the first of which were opened in the nineteen-sixties, provided skateboarders with the opportunity to pursue their lifestyle in a controlled environment. Those who saw skateboarding on public land as a nuisance may have been appeased by the existence of these purpose-built recreational environments, first appearing on the West Coast of America. Mainstream acceptance of skateboard culture, with professional skateboarders gaining respect and cementing the lifestyle within the public consciousness, led to the Rom Skatepark and Southbank skate parks in London becoming heritage sites in 2014.

Films and television, in the form of fiction or non-fictional documentary, has played a significant role in popularising skate culture and the influence of these works of art has been felt across the generations. Skateboard Kings, released in 1978, is a documentary about the skateboarding scene in Los Angeles and examines the hedonistic lifestyles of a skating group called the Z-boys. The film captures the early origins of skateboard culture where the ‘golden age of skateboarding’ begins. Other films about skateboarding that have left a lasting impression on popular culture include Gleaming the Cube, Grind and Street Dreams.

Bart Simpson, a main protagonist on The Simpsons, was a skater and skateboard stunts were central to the plot of episodes in the earlier seasons. The Jackass franchise, which began as a television series on MTV at the turn of the twenty-first century, had its origins in short films that were commissioned by Big Brother skateboarding magazine. There are now many famous skateparks around the world including Amazing Square in Japan, Le Bowl in France, Lincoln Park in the United States of America, Stoke Plaza in England and the Black Pearl in the Cayman Islands.