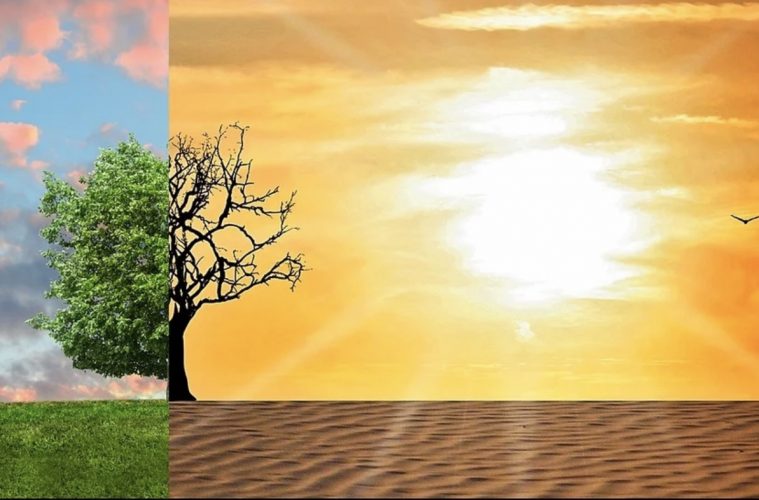 What can we do to fight climate change?

The National Geographic Society defines climate change in simple terms as “a long-term shift in global or regional climate patterns”, specifically “the rise in global temperatures from the mid-20th century to present.”

The alarming effects of climate change and global temperature rise are spreading fast and wide, and according to the latest major report by the UN’s Intergovernmental Panel on Climate Change, faster and wider than either nature’s or humanity’s ability to adapt. Experts who have contributed to the report are referring to the impacts of climate change as “much more widespread and much more negative than expected”.

If we can’t halt the pace at which climate change is worsening, we will be heading towards catastrophic consequences soon. Extreme weather events will become more common by the day, a large number of terrestrial species will face extinction due to sea level rise, malnutrition will spread across many parts of the world, and several areas around the world will become inhabitable due to global warming, all in less than the next two decades.

This means the time to take preventive action is largely past us, and we are now hard-pressed to take urgent corrective action. The responsibility boils down to each of us, as individuals and communities and businesses and governments. But as concerned inhabitants of the planet, what can we do in our individual capacities about the global climate system to slow its hurtle towards ‘point of no return’? At the Katingan Mentaya Project, we have curated ten simple ways in which you can combat climate change and contribute towards a clean and green economy.

About one-third of the world’s annual food production – approximately 1.3 billion tonnes – is lost or wasted. This is equivalent to 10 per cent of global greenhouse gas emissions. Food spoils on the store shelves because retailers want to meet high demands and it spoils in our homes because we buy more than we need. global greenhouse gas emissions

We can cut down on food waste by buying only as much as we need, measuring out the right portions for cooking, using all edible parts of groceries, storing food correctly, and finishing leftovers. What can’t be consumed can be composted, shared with friends and neighbours, or donated to a local food bank. Composting is in fact a great way to manage organic waste and reduce environmental impact.

Our dietary choices can have a significant impact on our carbon footprint. Switching to a vegetarian diet can bring it down by half. Going vegan can bring it further down. But if completely cutting off meat sounds too drastic, try going from a high to low meat consumption lifestyle, which can make a big difference as well. Skipping just one serving of beef once a week for a year can reduce the release of as much greenhouse gases as is produced by driving 348 miles in a car.

Currently, about 50 per cent of global farmlands is used for livestock grazing, with beef production being the biggest driver of tropical deforestation. Cutting down on meat consumption can free up land for the benefit of wildlife and carbon control.

The three R’s of smart consumption habits still hold true – so reduce, reuse, and recycle. Buying less means you are contributing that much lesser to landfills and carbon emissions. Consider fast fashion as an example. The fashion industry itself is responsible for about 8-10 per cent of the world’s greenhouse gas emissions – of which ‘fast fashion’ is a leading contributor. The throwaway culture means 60 per cent of clothes end up in landfills in the first year of their use. At this pace, over 150 million tonnes of fashion waste will clog landfills by 2050.

Buying less means you buy things that last longer. When it comes to fashion, look for sustainable labels, shop at charity stores, switch to a capsule wardrobe, use rental services for special occasions, repurpose old clothes, and donate what you’ve grown out of.

Buying sustainable isn’t limited to fashion. For instance, when shopping for food, it is by far better to buy local. Frequent your local farmer’s market and stock up on fresh produce to help small businesses and cut back on carbon emissions caused by supply chain logistics. Eating local almost always goes together with eating seasonal, which supports the natural growing cycles of plant-based foods.

To understand the kind of impact sustainable agriculture can have on climate action, consider that – according to UNEP – sustainable rice production in the Asia-Pacific region alone can reduce up to 700 kilotonnes of carbon emissions in a year.

Almost everything we use in our homes and workplaces can be recycled, from paper and plastic to metal and electronics. Virgin-made products exploit more natural resources and consume more energy than recycled products. For example, recycling aluminium cans takes 95 per cent less energy than creating them from fresh aluminium.

This makes recycling a necessary tool for mitigating climate change– by lowering the volume of raw materials used in the manufacture of products, and by reducing the amount of waste generated due to manufacturing and use of new products. A simple lifestyle change such as this can help reduce carbon emissions by 5.5 to 6.02 gigatonnes

Consider switching to renewable energy at your home by subscribing to renewable utilities or opting for clean energy devices. Many people are installing solar panels on their roofs with the technology becoming accessible and affordable. You can start by optimizing your current energy usage. Switch off appliances when not in use. Turn your heating down. Insulate your roof. These will not only reduce your emission levels but also save you money.

Another cost-efficient way to save energy is to switch to LED lighting. These use half as much electricity as compared to compact fluorescents and about one-tenth of what is used by incandescent bulbs. They last longer than regular bulbs and contribute to long-term savings of up to 50-70%. Studies show that a global switch to LED technology could save as much as 1,400 million tonnes of carbon emissions.

The world’s transportation systems are responsible for the maximum use of fossil fuels and account for about 37% of carbon emissions among end-use sectors. But many countries are now implementing policies for cleaner fuel and decarbonized travel. You might have noticed airlines charging an optional amount to offset your carbon footprint when you fly.

But as the New York Times once suggested, flying is the most serious environmental sin for many people. To offset this, there is a lot more you can do. Consider walking or cycling when travelling short distances, choosing public transport at other times, reducing the number of flights you take, carpooling when possible, and using electric vehicles.

Even though carbon emissions have already caused a mean global temperature increase close to 1.1 degrees Celsius, climate change denial and misinformation is still rampant. We can help spread awareness and information about the climate crisis among friends, family, and co-workers.

Lead by example, and encourage them to adopt sustainable habits and reduce their own carbon footprint. Go one step further and take community action by joining local town halls or global campaigns like the UN’s ActNow for individual action on climate change and sustainability.

Voicing our support for climate action isn’t limited to volunteering in social campaigns and signing online petitions. When participating in your local electoral process, vote for a climate activist. Lobby your local council to support climate action and reduce carbon pollution. Contact local representatives to urge them in favour of pro-climate policies.

Tackling the climate situation is a collective responsibility, and not limited to the role of the state and the people. Businesses have a key role to place too, especially since two-thirds of historical greenhouse gas emissions have been caused by only 90 carbon-producing companies.

There are a few ways you can push for more responsible action by companies. When managing your savings and investments, choose institutions that do not fund fossil fuel expansion or carbon-polluting industries. Build your portfolio around fossil-free investments. If enough people do this, it sends a clear signal to the market that investor preference is in favour of ethical investments and projects. Known as divestment, the movement has gone from a fringe strategy to a $14.5 trillion movement in recent years, with over a thousand major investors committed.

You can also lobby local businesses to aim for net zero emissions by offsetting their carbon emissions. When there is a gap between their carbon reduction goals and actual reductions, businesses can purchase carbon credits from a well-known carbon finance program like the forest-based Katingan Mentaya Project (KMP).  Verified carbon units (VCU) from KMP help offset tonnes of carbon emissions while protecting peatland habitats in Central Kalimantan, Indonesia for five Critically Endangered, eight Endangered and 31 Vulnerable species of wildlife.