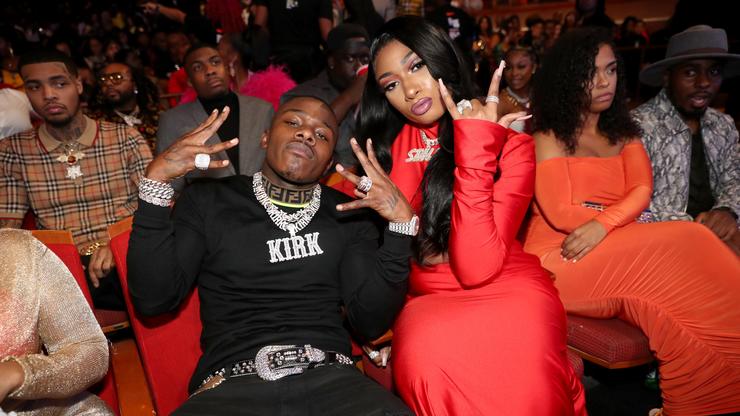 DaBaby started his career as Baby Jesus. His real name is Jonathan Lyndale Kirk. DaBaby is an American rapper, singer, and songwriter from Charlotte, North Carolina. He released several mixtapes between 2014 and 2018. But he rose to prominence in 2019. Now, he is one of the most popular rappers in the country. How much is DaBaby net worth?

He got famous after releasing Nonfiction, his debut mixtape. Now, DaBaby net worth is more than $3 million. When he started his career, he chose Baby Jesus as his first moniker. But that was too controversial and didn’t mesh with the rap industry. So, Jonathan changed his moniker to DaBaby

He got his big break after signing to Arnold Taylor. He is the president of the South Coast Music Group label and a big radio promoter. Taylor saw him perform in North Carolina clubs. At the time, Arnold launched his label and wanted DaBaby as one of his first clients. Taylor also launched stars like Future and Yo Gotti.

All of them started working together and build buzz around the South with club shows and mixtapes. DaBaby was still finding his sound. At the time, Jonathan also signed a short-lived distribution deal with Roc Nation, the label of Jay-Z. They released his Blank Blank mixtape. This was his breakout deal in late 2018.

Thanks to the bidding wars between major labels, DaBaby signed a seven-figure recording deal with Interscope. In 2019, after signing with Interscope, the rapper began his imprint label called Billion Dollar Baby Entertainment. On March 1 the same year, he released his debut studio album, Baby on Baby.

Throughout 2019, he appeared as a guest on other songs including Cash Shit by Megan Thee Stallion and Baby by Quality Control. Both songs reached the top 40 on the Billboard Hot 100 chart.

In the summer of 2019, DaBaby announced his second album with a title Kirk. This is a tribute to his last name. He released the album on September 27, debuting at the top on the Billboard 200. The lead single Intro peaked at Number 13 on the Billboard Hot 100 chart. At this point, he collaborated with artists like Post Malone on other songs.

DaBaby net worth is more than $3 million. He had one of the most successful years in 2019. And he wrapped the year with Grammy nominations.

At the 62 Grammy Awards in 2020, he got two nominations. Suge got nominated in Best Rap Performance and Best Rap Song.

Experts describe his style as staccato, precise, and brutal. His rapping style is a syllable-crushing force with forwarding momentum. Often, you get an illusion he starts rapping before even the beat begins.

In his interviews, DaBaby cites Future, Kanye West, and Lil Wayne as his motivation. He says he studies all genius marketers throughout the rap game. Some experts compare his rapping to Busta Rhymes, Ludacris, and Eminem. The similarities include “inventive rap stylist unafraid to make videos full of funny parodies”.

One of the reasons DaBaby net worth is more than $3 million is his contract with Interscope. He signed a seven-figure deal with the label.

But he is also quite popular on social media. DaBaby has more than 4.3 million subscribers on YouTube. So far, he amassed more than 1.2 billion views on his videos. Those views bring a lot of cash to his bank account.

And of course, he has his own sub-label. Billion Dollar Baby Entertainment represents artists like Rich Dunk and DJ Kid.

2020 will be a bad year for him. The Covid-19 pandemic stopped him from touring. Some estimates are he will lose $7 million in ticket sales alone.

DaBaby has an on and off relationship with MeMe, a professional barber. They have two kids together. Their relationship is a unique one. MeMe says they are both single, but he is her “boo”. They are parents together, but do they explore other romantic options?

The two met five years ago through mutual friends. Since then, they have an on and off relationship. There is no pressure on nothing.

During his life, Kirk got involved in a couple of incidents and legal issues. In January 2020, he got detained and questioned in Miami. That was in connection with a robbery investigation. He later got arrested after authorities found he had a warrant out in Texas. According to sources, members of his crew jumped and robbed a music promoter.

During his Up Close N Personal Tour, he slapped a female fan on his way to the stage. The crew booed him, and he left the venue without performing.

DaBaby net worth of $3 million allows him to live a luxurious lifestyle. His jewelry collection is lavish. It includes a $40,000 Audemars Piquet watch, a $25,000 Billion Dollar Baby charm, a $20,000 Cuban link, and much more.