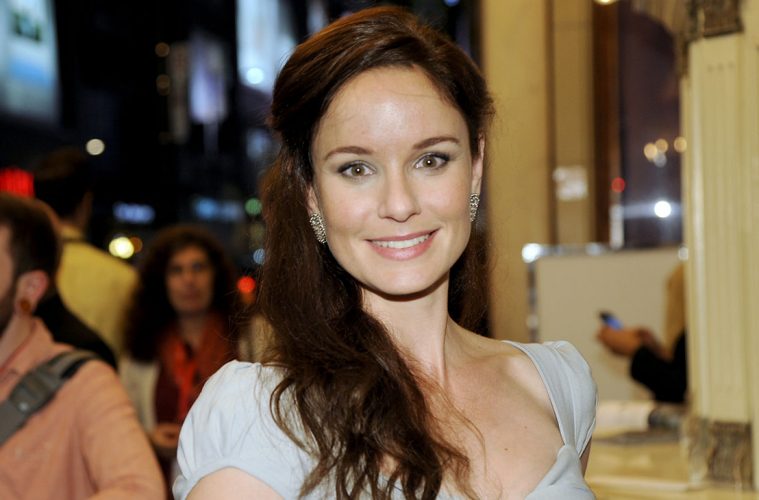 Sarah Wayne Callies is an American actress. She is known for starring as Sara Tancredi in Fox’s Prison Break and as Lori Grimes in AMC’s The Walking Dead. She has also starred as Katie Bowman in USA Network’s Colony and Robin Perry in NBC’s Council of Dads.

Sarah Wayne Callies was born on June 1, 1977, in the Chicago suburb of La Grange, Illinois. She is the daughter of law professor David Callies and his wife, English professor Valerie Wayne, who moved their daughter from England, where an uncle, John Moore, had served in Margaret Thatcher’s cabinet, to Honolulu, Hawaii to teach at the University of Hawaii at Manoa. A solid student at the independent Punahou School, she fell in love with acting as a junior but worried that the extra-curricular interest would have a negative impact on her grades. She shifted her focus to feminist studies while at Dartmouth College, with the intention of following her parents’ footsteps into education, but the rigor and loneliness of constant study proved too great of a grind for her. She soon decided that her time on stage in high school had been a more freeing experience for her, and so pursued a master of fine arts degree from the National Theater Conservatory in Denver, CO, from which she graduated in 2002.

A thoughtful, willowy leading lady on television and in the occasional movie, actress Sarah Wayne Callies portrayed intelligent women faced with life-changing challenges in two hit series: Prison Break (Fox, 2005-09) and The Walking Dead (AMC, 2010- ). The former made her a favorite among television viewers, who rallied behind her when her character, a doctor aiding two inmates in an elaborate escape plan, was murdered, forcing producers to later revive her character. The latter was a bonafide pop culture phenomenon, a dramatic series about a zombie outbreak that evaded the gore and trash elements of the genre. In both cases, Callies was among the strongest elements of the series, bringing a quiet strength to her performances that made her a talent to watch.

Callies launched her onscreen career with the short-lived legal drama Queens Supreme (CBS, 2003), which was followed by several stints as a guest star on episodic series like L.A. Dragnet (NBC, 2003) and Law and Order: Special Victims Unit (NBC, 1999- ). In 2003, she was cast as Jane to Travis Fimmel’s updated Lord of the Jungle in an updated Tarzan (The WB, 2003). Callies’ Jane was a New York police detective who found herself teamed with Fimmel’s long-lost scion of an industrial empire, returned to civilization after two decades in the jungle, and now dedicated to helping those in need. The series lasted just eight episodes.

In 2005, Callies earned her star-making role as Sara Tancredi on Prison Break. A dedicated doctor and the daughter of Illinois governor Frank Tancredi (John Heard), Sara becomes involved with the series’ main characters, Michael Scofield (Wentworth Miller) and his brother, Lincoln (Dominic Purcell), through the former’s regular visits for insulin injections. She also returned for the series’ revival in 2017.

Critical reaction to Callies’ performance throughout the series was universally positive and led to several opportunities in features throughout the show’s network run. In 2006, she played Marjorie, a young woman who translated several mystic scrolls in pursuit of enlightenment in The Celestine Prophecy, a misbegotten film adaptation of the best-selling New Age novel by James Redfield. More watchable was Whisper (2007), a supernatural thriller about a quartet of kidnappers, including a felon (Josh Holloway) and his fiancée (Callies), who is hired to abduct a young boy, only to discover that he possesses unearthly powers of suggestion, causing the group to turn on each other. Despite critical approval, the film failed to reach a broad audience.

Callies bounced between guest work on shows like House, MD (Fox, 2004- ), where she played a woman in an open marriage, and indie dramas like Bittersweet (2008) and Lullaby for Pi (2010). She scored a second major series hit in 2010 with The Walking Dead, AMC’s grisly adaptation of Robert Kirtman’s graphic novel series about the survivors of a worldwide plague that turned its victims into flesh-eating zombies. Callies played Lori Grimes, wife of the show’s hero, sheriff’s deputy Rick Grimes, who becomes separated from her husband after the plague outbreak, only to be reunited after he searches for her amongst the ruins of Atlanta. Their reunion, however, was fraught with complication; she had begun an affair with Rick’s partner Shane (Jon Bernthal) after he convinced her that her husband was dead. Massive ratings hit, The Walking Dead assured Callies’ fans that she would remain on television for a long time to come. During this period, Callies also announced that she had completed her first screenplay, and took leads in the horror-thriller Face in the Crowd (2011) with Milla Jovovich, and the spy drama Tangled (CBC, 2010).

In August 2010, Callies’ first screenplay, an adaptation of Campbell Geeslin’s children’s book Elena’s Serenade, was optioned by French production company Fulldawa Films. Callies starred in the Nigerian movie Black Gold (2011) and one of the female lead roles in the Canadian thriller Faces in the Crowd (2011). In 2015, she co-starred with Nicolas Cage in Uli Edel’s thriller film Pay the Ghost. In 2016, she returned to television in the lead role of Katie Bowman in Colony, once again co-starring alongside Josh Holloway.

While Callies’ exact fortune is not known exactly, according to some sources it is $3 million, while others estimate it at $5 million. One way or another, we have an approximate idea as to how much she ‘weighs’.

On July 21, 2002, Callies married Josh Winterhalt, whom she met at Dartmouth. On January 23, 2007, her publicist announced that the couple was expecting their first child. Their daughter was born in 2007. Their second child, an adopted son, was born in 2013.

While working in front of the camera keeps Callies busy, one of her greatest passions has been working alongside the International Rescue Committee (IRC) for the last decade, helping to aid refugees worldwide. She has worked in their camps in Iraq, Jordan, Serbia, Macedonia, and Thailand and her blogs can be found on HuffPost. In 2010, Callies was named the first “voice” for the organization. She currently lives with her family in British Columbia, Canada.​​